A musician for much of his life, "Songs With Words Are for the Birds" is Alex's first full album to be accompanied by lyrics. Over the course of six months, he recorded it in the evenings after work and even converted one of the smaller rooms in his Boston-based office into a recording studio. 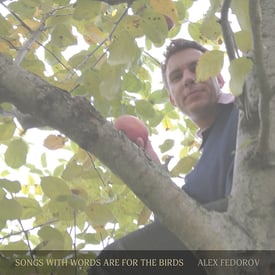 "I already had a couple of guitars and a keyboard, plus a laptop with Logic on it," says Alex. "Whenever lyrics or concepts came to me, I would just jot things down on my phone."

For a long time, Alex says he mostly focused on making instrumental music — songs that were experimental and had more of a "hip-hop" feel to them. Creating an album complete with lyrics was Alex's challenge to himself.

"A lot of the time I end up writing songs that I think are funny or come from some type of inside joke," says Alex. "Though that's not the case throughout this collection, it's clear that 'MJ Truths,' a defamatory song about Michael Jordan, and 'Lo Mein,' a parody of Eric Clapton's 'Cocaine,' are pure nonsense."

Between love songs to songs inspired by amusing situations, other tracks on the album are based on a unique variety of Alex’s personal experiences and even those of his friends.

"'Between Stone Lions' is about my apartment and moving there after a really tough time. 'Marilyn' is a love song to Marilyn Monroe based on one of the pop art posters that someone was throwing away in Waltham. 'Dreammaster' was about trying to protect my friend Dave from the unwanted advances of someone with very long fingernails."

You can also hear Alex's recently-released instrumental album, "Social Studies," which he created under the pseudonym Spacewolf.