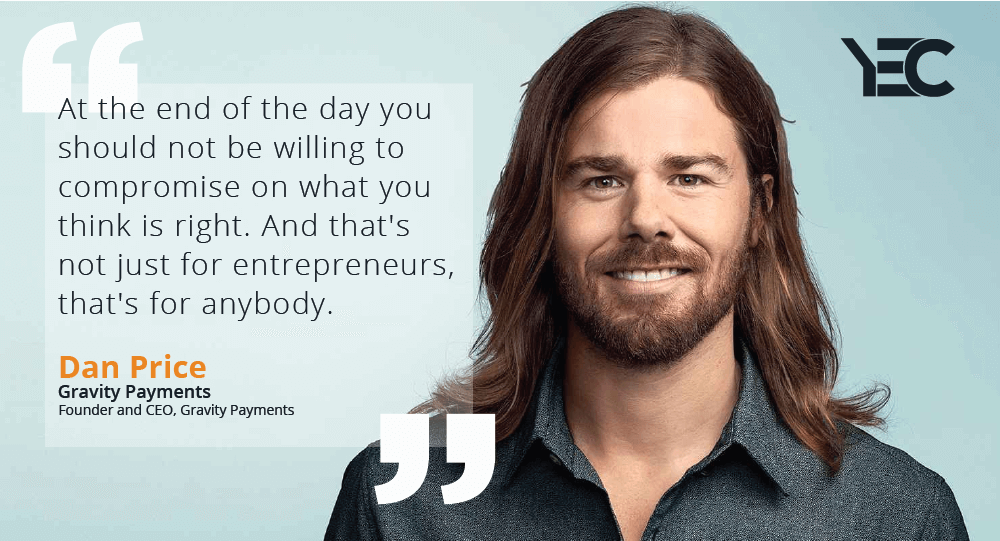 You may have heard of YEC member Dan Price, founder and CEO of Gravity Payments — the guy who took a million-dollar pay cut to ensure that all his employees made a living wage of at least $70,000. This groundbreaking move pushed Dan and Gravity Payments into business and financial spotlights.

Dan’s decision to make this change wasn’t a publicity stunt; it was a consequence of his firm belief in fair economic policies. Although this unprecedented move caught the attention of the press and the business world, it stemmed from the same simple impulse that caused Dan to create Gravity Payments in the first place — the impulse to support the little guy.

Like many people, Dan noticed unfair odds and crippling financial policies affecting small businesses. Unlike most, he is doing something about it.

We interviewed Dan to find out what he’s working on, what motivates him, and how he measures success. Here’s what he had to say:

On the Origin of Gravity Payments

I believe that big banks and institutions should not be able to charge whatever they want to independent businesses for their credit card processing. I think that's unfair. And so we have historically been focused and successful with our merchants, decreasing the cost and headaches associated with accepting payment, like credit cards and debit cards.

I was in a rock band growing up, and I had the privilege of knowing independent business owners because of it, because they let me play shows at or hang posters for our shows in their businesses. One of these business owners was Heather, who owned a coffee shop named Moxie Java in Caldwell, Idaho. After finding out what she was being charged for credit card processing, I helped her get lower rates by negotiating on her behalf and speaking up to the credit card companies on her behalf.

That worked well, so I started doing that over and over again for other local businesses. And eventually the business got big enough that we could start to build our own products and services to provide a more sustainable solution.

The actions of corporations when it comes to the environment, income inequality, to meddling in politics will literally take our entire world to a place of decay or even destruction. And what's most important to me is trying to do everything in my power to fight that.

I do this by paying a living wage. By accepting pay that is adequate but not excessive. By treating our clients the way we would like to be treated. By treating them fairly. And by creating innovative solutions to help empower individuals and smaller companies in their defense against the aggressive behaviors of large corporations.

I think what inspires me is the fact that we, as human beings, are metaphorically headed off a cliff right now. And I want us to not go off that cliff.

Here's what I know. When our clients tell us that the money we saved them or the things we did to help them kept them in business and helped them to get to where they are today—like what I've heard from several businesses right here in Seattle—or when people at Gravity who are now personally empowered by having a living wage start families, buy houses, get out of debt, and save for their retirement—those are the things that actually mean something to us.

I'm somebody who was chosen by a mission to stick up for the little gal or guy, and that was not optional for me. That's who I am, and there are positive and negative repercussions to that reality. The positive repercussions are I'm going to live a life where I can have the ability to create a lot of meaning for myself. The negatives are that I'm going to be, at times, stressed, uncomfortable, lonely, and I'm going to sacrifice things.

As for the habits that have made me successful, I like to read one to two books a month. I go to counseling. I meet with, in a very intimate setting, 10 other CEOs on a monthly basis who provide feedback and ideas and helpful, private scrutiny, and I’ve done that for the last 10 years. And I eat well, sleep well, and exercise regularly. But most importantly, I've made a habit to listen to other people and try to understand the value that they are giving me when they speak with me.

On Expanding His Vision

I want to help more businesses. I want to change in the sense that I want us creating software and technology solutions for companies that really allow them to go toe to toe with the big companies out there. And I think so far we've done that for very few companies, but I want to try to do that for everybody that I can. And I want it to be very meaningful.

What I'm working on now, in addition to continuing that, is trying to create software through my own work, and also investing in other entrepreneurs who can enhance the abilities of independent businesses to compete with the likes of Amazon and Starbucks. We are very passionate about how independent businesses make all of our lives richer and better. And at first we wanted to protect them from an unfair industry. Now we want to protect them from unfair competition from mega corporations.

The best career advice I have is to not take advice from anyone. You should be very humble and listen and take people's ideas into consideration. But at the end of the day you should not be willing to compromise on what you think is right. And that's not just for entrepreneurs, that's for anybody.

There are an incredible number of travesties that we've experienced as human beings that could have been avoided if we all were willing to, in every moment, stand up for what we knew deep down was right. There are so many examples in history where everybody, every single person knew that something was wrong when it was happening. But we just thought that we were being told or advised that we needed to do it, so we did it anyway. And if we all stand up together, we all commit to this, then we will all shield each other from the consequences. 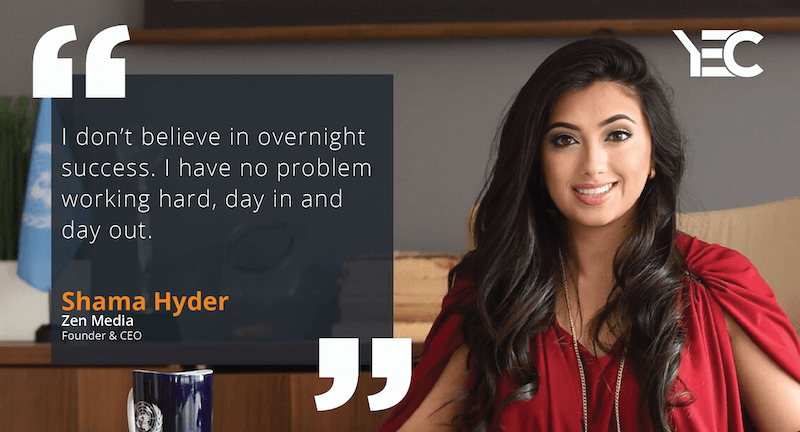 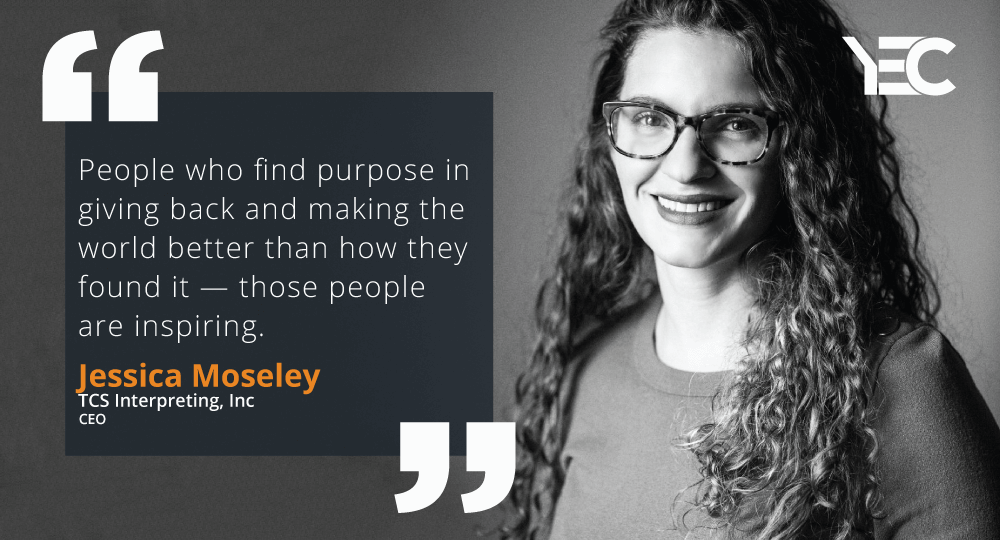 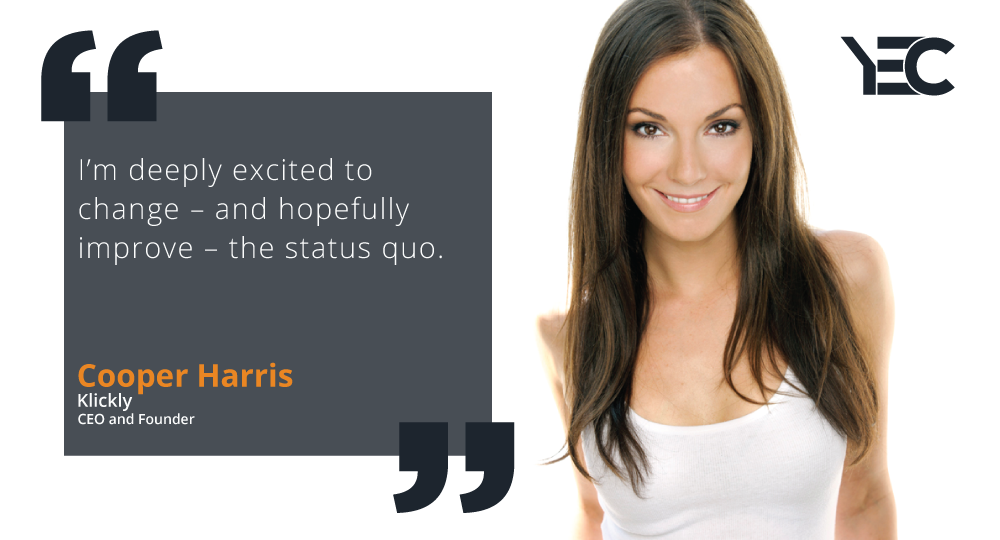